December is usually one of the strongest advertising months and that was the case again last month for podcasters. Magellan AI reports the top 15 podcast advertisers spent a combined $47.686 million last month, which was an increase of 37% from what the top 15 spent a month earlier.

The online mental health brand BetterHelp once again remained the top podcast advertiser during December according to Magellan AI, which estimates it decreased its spending 12% percent to $9.2 million. That was also more than it spent in December 2021. BetterHelp’s ads were detected on 1,010 different shows with Comedy remaining its most-used genre.

Amazon remained the second-biggest advertiser in terms of dollars spent, but it placed its ads across more shows than any other brand monitored by Magellan AI. It says Amazon ran ads on 1,120 podcasts – most often Sports shows – as it spent an estimated $6 million. That was up 15% from November.

The holiday season helped keep the e-commerce platform Shopify in third place as its spending jumped 61% month-to-month to an estimated $3.9 million.

“These brands have increased their spend notably in December, but have certainly been present on this top 10 list before,” Magellan AI CEO Cameron Hendrix said. During a webinar Tuesday, he said there were also sizable spending increases from advertisers including Athletic Greens, HelloFresh, and Rocket Mortgage.

The sports betting company Flutter Entertainment moved into the top five as its podcast ad spending rose 59% last month to an estimated $3.2 million as it rose from No. 6 in November to No. 4 in December. And the virtual gaming company VGW – the parent of brans including LuckyLand Slots and Chumba Casino – spent $3.1 million per Magellan AI estimates, putting it in fifth place.

“It’s a brand that has definitely been in expansion mode from terms of adding new shows for the last seven or eight months now. And that trend so far has continued in January with about seven eight shows already added about midway through January,” Hendrix said.

Across the top 15, the Sports genre was the most-used by nine of the top 15 advertisers according to Magellan AI’s estimates. Three other advertisers spent most of their money in the Society & Culture category.

Magellan AI’s list of movers and shakers – the brands that increased their podcast spending the most during the month – was led by JP Morgan Chase, which more than quadrupled its podcast ad spending month-to-month to more than $1.3 million. But the December holiday season largely drove the list of big movers.

Walmart tripled its podcast ad spending last month to $542,000. Givewell increased its investment by five-fold to $542,000. And Bed Bath & Beyond spent $264,000 during December, or six-times what it spent in November. 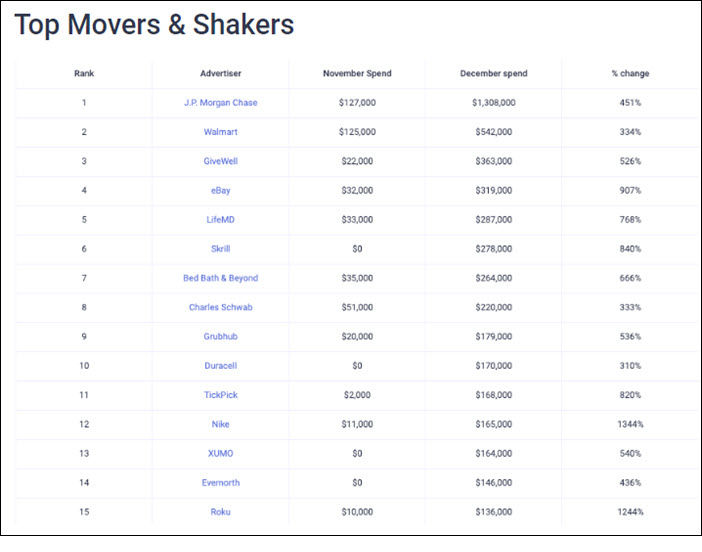 Magellan analyzes podcast advertising data from the top 3,000 podcasts in the U.S., as ranked by Apple Podcasts. Magellan AI’s proprietary model is used to estimate advertising spend. It includes factors such as the number of ads and variation in ad load detected for a given episode, number of downloads for each episode, and estimated CPMs as reported in select media kits and estimated based on popularity.